skip to main | skip to sidebar

From time-to-time I come across cards that are historically ugly, here are some of the worst.

Today I bring you 2011 Bowman Grady Sizemore, one of the most talented and smooth players to grace the diamond in recent years. He must have pissed someone at Bowman off for them to choose this image to grace his Bowman card. 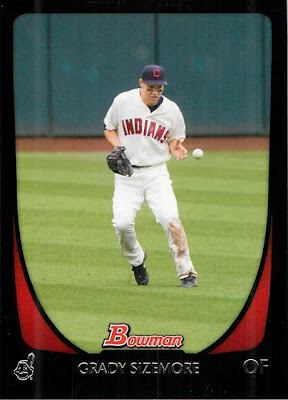 To avoid any possible confusion between Sox Prospects' Cards and the website Sox Prospects, I have chosen to go with a new name, but same mission, for my new blog. So please check out Cards of Future Fenway Stars for news about minor league prospects and new releases from a Sox Prospector's perspective.

Please check out my new blog Sox Prospects' Cards for the most complete and up to date information on the card of the Boston Red Sox Top Prospect.

www.soxprospectscards.blogspot.com
Posted by George at 8:04 PM No comments: 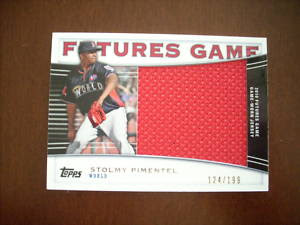 It has been too long since I last posted, but I have had a very busy two months. Since last time that I wrote, I have gotten married, went on my honeymoon and started a new job. But, going forward, I plan on writing more regularly.

For card collectors that focus on baseball prospecting, this time of year is very exciting. Topps Pro Debut Series 2 was fantastic; 2010 Donruss Elite Extra Edition looks strong again, especially since DE3 has gone back to the 100 card base set after a 50 card DE3 base set in 2009; and soon 2010 Bowman Chrome will be released, with the promise of many more great prospect cards.

I just thought that I would briefly discuss some of my thoughts about these sets.
Thought #1: None of these sets include cards of super-prospect #1 Pick Bryce Harper. While Harper's absense should help to keep the cost of packs and boxes lower on the secondary market, his star power could have driven any of these sets to 2010 Bowman Draft Picks and Prospects hype levels.
2010 Topps Pro Debut Series 2: The Futures Game Mega-Swatches are the highlights of the set. Although the Autograph list includes top prospects like Jesus Montero, the Mega-Swatches from some of the top prospects in the game, like Hank Conger, Ben Revere, Mike Trout, and Stolmy Pimentel (pictured at top), are what will keep people busting this wax. Although packs are a bit pricey, singles of prospects like Jose Iglesias, Lars Anderson, Kyle Gibson, Mike Moustakas, Austine Romine, and Bryce Brentz (heretofore known as "The Other Bryce") can be found for cheap.
2010 Donruss Elite Extra Edition: Featuring an impressive list of 2010 draft picks, DE3 offers everything that a prospector could ask for (minus Bryce Harper that is).
Posted by George at 3:44 PM No comments:

My Trip to the Big Sports Card & Autograph Show in Mansfield

Today I went to the Big Sports Card and Autograph Show at the Mansfield Holiday Inn, the first time that I’d been in a little over four years. To be honest, I didn’t really expect the trip to be too productive, but it was only about a half-mile from my apartment and I wanted to show my fiancé what a card show was like. Plus, today the show was having a promotion that if you wore Red Sox or Bruins clothing you got in free.

So, we got to the Holiday Inn around 9 o’clock and walked to the ballroom where they were holding the show. At the door, the show’s organizers gave us two packages of cards, which I later opened and found 2010 Sage HIT Sam Bradford, Jimmy Clausen and Ryan Mathews cards. Not bad for free.

When we entered the ballroom, there were probably already four or five dozen people there and close to fifty venders. Not having been there in awhile, we walked around the ballroom to get a general feel for what different venders were offering. There were a good number of vintage dealers, some dealers specializing in unopened boxes, lots of tables of high-end autographs, game-used and refractor cards, and some tables with boxes full of cards for 10-25 cents each.

Since I’m getting married in a few weeks and don’t have too much extra money to be spending on cards, I set a $20 budget for myself and wanted to get the most for my money, so I decided to dig through the cheap boxes and hope to find some gold. I found one seller who was selling 2008-2010 Bowman and other assorted cards for 25 cents each, 60 for $10, so I went to town.

Overall, I am very pleased with my purchases, and am confident that I will be able to easily double my money re-selling these cards. I am especially happy with a number of the baseball prospect cards that I was able to pick up for a steal. I never cease to be amazed at the number of card dealers who do not take the time/effort to research the players before throwing them in junk boxes, and how few collectors and prospectors are willing to put in the time to dig through the boxes and find cardboard gold.

However, the most interesting part of my card show experience came when I was digging through the boxes trying to get to 60 cards when a younger collector, probably 17 to 20 years old, came over to the table where I was going through the box and tried to sell his NSA Tiger Woods/Michael Jordan dual relic card. He told the dealer that he had bought the card at Target for $50 and was looking to sell it for $50. The dealer kind of looked at it funny and said that he had never heard of the company. So I chimed in, "Do either of you read the blog, "Sports Cards Uncensored?" They both looked at me like I had 5 heads. "Well, it is one of the best blogs on the intenet, and the guy who writes it did a thing a couple months ago about how most of the NSA stuff is definately fake. I wouldn't touch the stuff." The dealer quickly handed the card back to the kid, and said that he wasn't interested. Later, when I was still looking through the boxes, another guy came over with a Chris Johnson Topps Rookie Premier Auto card. I decided that I couldn't do all of the dealers research for him, so I didn't bother mentioning how all of those are fakes, too.
Posted by George at 3:28 PM No comments: 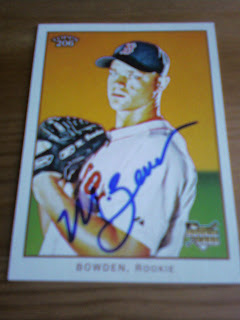 Just days after adding a "Michael Bowden Mania" page to the Pessimist Card Collector, the Boston Red Sox have promoted 23-year old Michael Bowden, the Red Sox 2005 first round pick who was recently converted from a starter to a reliever, from AAA Pawtucket. To see my collection of autographed Michael Bowden cards, check out Michael Bowden Mania.
Good luck Michael!
Posted by George at 2:15 PM No comments:

Although I already had the complete set and have gotten close to 50 cards signed, I jumped at the opportunity to buy and open these boxes for $38.00, which I thought and still do think was a steal. These were the first packs of cards that I have opened since last December and it was a fun time pulling multiples of Justin Masterson, Daniel Bard, Jesus Montero, Jose Tabata, Michael Bowden, Ryan Kalish and Lars Anderson.

As an added benefit, as I mentioned in the video, these boxes contained exclusive variation cards from the regular set, including cards of top prospects Justin Masterson, Ryan Dent, Will Middlebrooks, Bubba Bell, Oscar Tejada, Nick Hagadone, Zach McCallister, and Arodys Vizcaino. Furthermore, the team boxes were the only places to find 2008 TriStar PROjections cards for Andrew Brackman, Drew Sublett, Chase Weems and Mark Wagner.

As for hits, I was more than happy to pull autographed cards of Yankees #1 prospect Jesus Montero and rising Red Sox prospect Anthony Rizzo. In addition, David Robertson is already a member of the Yankees bullpen and Bryce Cox was once projected to be the Red Sox closer.

While TriStar and similar minor league-based sets may not appeal to everyone, it is the perfect set for any prospector or minor league autograph collector. I could not be happier with my purchase and my pulls. 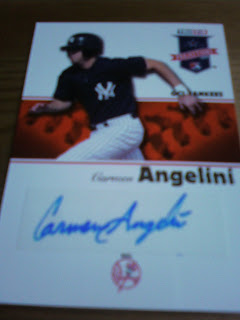 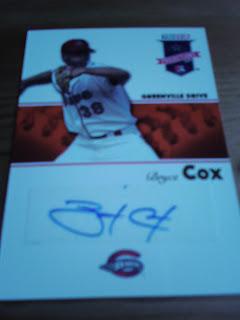 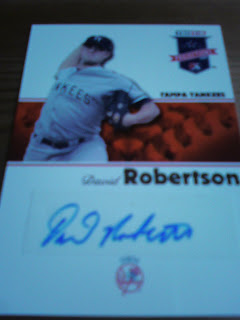 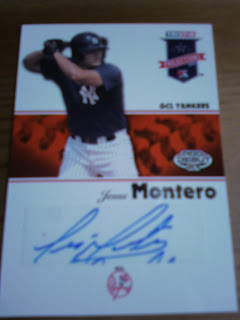 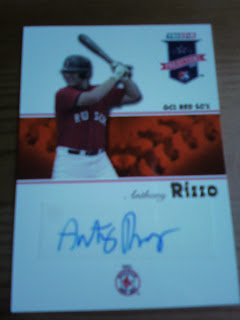